A Curse So Dark and Lonely~ Book Review 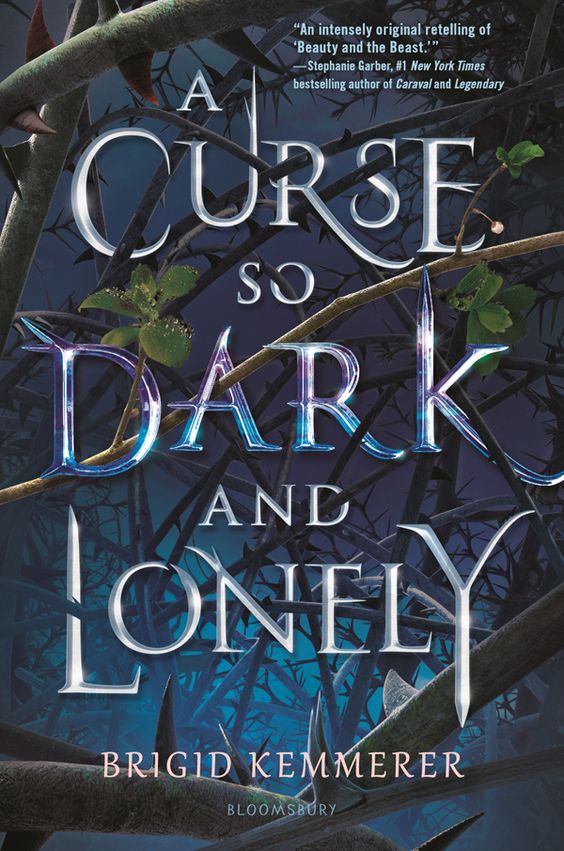 How’s it going everyone. I hope you’re all having lovely day.  Today, I’ll be reviewing A Curse So Dark and Lonely by Brigid Kemmerer.  I had been keeping my eyes on this book and when I saw someone on Twitter saying the eBook was on sale, I decided to snatch it up immediately!  I've been wanting to read this book for a while after I'd seen previews of the book before it was released.

It once seemed so easy to Prince Rhen, the heir to Emberfall. Cursed by a powerful enchantress to repeat the autumn of his eighteenth year over and over, he knew he could be saved if a girl fell for him. But that was before he learned that at the end of each autumn, he would turn into a vicious beast hell-bent on destruction. That was before he destroyed his castle, his family, and every last shred of hope.

Nothing has ever been easy for Harper. With her father long gone, her mother dying, and her brother barely holding their family together while constantly underestimating her because of her cerebral palsy, she learned to be tough enough to survive. But when she tries to save someone else on the streets of Washington, DC, she's instead somehow sucked into Rhen's cursed world.

Break the curse, save the kingdom.

A prince? A monster? A curse? Harper doesn't know where she is or what to believe. But as she spends time with Rhen in this enchanted land, she begins to understand what's at stake. And as Rhen realizes Harper is not just another girl to charm, his hope comes flooding back. But powerful forces are standing against Emberfall... and it will take more than a broken curse to save Harper, Rhen, and his people from utter ruin.

My Thoughts:
This was an amazing read!  It was so much fun, I loved every minute of this book.  I'm fairly new to reading retelling and I'm happy to say that I'm looking forward to reading more in the future.  This is a Beauty and the Beast retelling with a slight twist.  This story is about Harper and how she was kidnapped from the modern world and taken to the magical world of Emberfall to help break Prince Rhen's curse.  I loved the writing and pace of the story.  The writing style made this story unique and the pace of the story wasn't too fast or slow.  My most favorite was probably the world building. Brigid Kemmerer was able to create parallel worlds of both the modern and fantasy world, which I really enjoyed seeing in this story.

There are two POV's that you read from Harper and Rhen.  I loved reading from Harper's perspective, she was an amazing character and she wouldn't let anything or anyone stand in her way.  She was strong, kind and caring, and determined.  Rhen was an interesting character as well, even though he has this arrogant air about him in the very beginning.  However, there was a softer side to him that began to show when he started to lower that wall that he had built long ago.  Their chemistry in the story was interesting since Harper originally wanted nothing to do with him.  So to see their relationship grow and change from hating each other to starting to care for one another was really enjoyable.  Grey was also a great character.  He was extremely loyal to Rhen and Harper and he would do anything to help and protect them.

The ending of the story left off on a slight cliffhanger and I'll be completely honest.  I wish I could get the second book sooner, I would love to know what happens next, but I guess I'll have to wait until January 2020 to see.  Overall, if you like Beauty and the Beast retellings, I definitely suggest picking up this story, once you pick it up you won't be able to put it down!

If you're interested in checking out Brigid's pages, the links are below along with places you can get the book.


Thank you all so much for reading.  I hope you enjoyed my review/suggestion. Until next time!

~Upcoming Bookish Reviews~
March 31st
You'd Be Mine by Erin Hahn
April 3rd
Romanov by Nadine Brandes
April 10th
Amy & Roger's Epic Detour by Morgan Matson
April 17th
Daughter of the Siren Queen by Tricia Levenseller
April 24th
The Shadows Between Us by Tricia Levenseller
May 1st
Bloodleaf by Crystal Smith
May 8th
When Wishes Bleed by Casey L. Bond
May 15th
A Curse of Thorns by Nicole Mainardi

Hello and Welcome to The Little Book Spy!

I'm Daniella. I have a passion for all things reading and writing. Here I review YA books and talk about all things bookish!